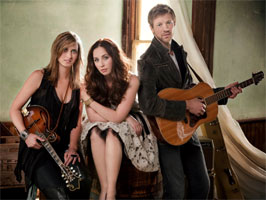 Edens Edge strike a careful blend of Lady Antebellum and Pistol Annies on their eponymous 2012 debut. Produced by Mark Bright, a hitmaker for the likes of Carrie Underwood and Rascal Flatts, Edens Edge certainly has a cool, bright sheen that fits neatly into the parameters of contemporary country-pop radio, but the group threads in traces of twang reminiscent of Miranda Lambert at her smoothest. Lead Vocalsist Hannah Blaylock invites these comparisons by leaning hard into the choruses, but Bright's arrangements are underpinned by acoustic guitars and Dobros, down-home instruments that peek out from underneath the gloss. The most appealing thing about Edens Edge -- both the group and the album -- is that they're at heart a pop group, one that's nearly as soft and ready for crossover as Lady Antebellum, but these strategically deployed roots flourishes keep them from being too slick and sugary, a risk the group certainly flirts with throughout the album. And, like much mainstream country of the new millennium, there is a heavier emphasis on product placement and name-dropping than necessary -- allusions to Bocephus and Alan Jackson in no way lend the group grit -- because Edens Edge's music is so pretty it needs no extra sweetening; it's the kind of music that becomes a hit not through its insistence but through its gentleness. Edens Edge may lack a distinguishing personality -- they're eager to fit into the confines of commercial country -- but the trio plays the game cleanly on this album, winding up with an ingratiating country-pop debut.