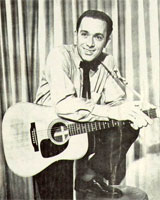 US Rockabilly singer, Connie Dycus was born Dec. 6, 1930 in Dyersburg Tennessee. He served in the Armed Forces and in the Korean War from 1952-54. In July 1955 he moved to Flint, Michigan and began working at General Motors. Connie was a Mason.
Connie was best known for his weekly live Country Music Show aired on WJRT-TV Channel 12 out of Flint called The Connie Dycus Show and The Country Cut-ups in the early 1960s.
Connie played many live engagements, clubs private parties etc. He recorded 20 different songs..and wrote 14 of those 20! He released one LP entitled "Let Ole Lonesome In". Connie was always available for charitable benefits and well liked by all!
Connie F. Dycus died January 2, 1978 in Flint, Michigan. He was inducted into the Michigan Country Music Hall of Fame in 1997 at Prairieville, Michigan.