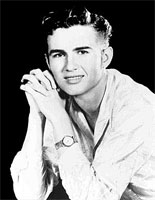 This Texas rockabilly dude got his first guitar when he was 14. It was the early '50s, and most of the songs on local radio were country music. Duvall graduated from high school in the exciting town of Huckabay, his rank among the school's total population of 300 unknown. What Huckabay might have lacked in exciting musical prospects was more than made up for in nearby Stephenville, a dairy town of about 10,000 people at the time, and the unlikely location of a tape recorder that would be used to record primitive examples of rockabilly and rock & roll. By the mid-'50s, Duvall was feeling the influence of new artists such as Carl Perkins, Elvis Presley, Buddy Holly, and others. He met older lead guitarist Lonnie Thompson in 1956; they started playing together, a classic case of the older, college kid leading the high school lad astray. They began recording at the facilities of a local radio station, the goal being to record enough songs on a given weekend to have a new song for the station to play on each day of the following week. They liked doing it, and each weekend would start the whole process over again. It was a demonstration of productivity that has been matched only by perhaps the pop group They Might Be Giants with their "Dial-A-Song" project, or the efforts of studio musicians who cook up tracks based on poetry submitted by mail-order customers. There was also a similarity with the early recordings of fellow Texan Ernest Tubb, who had also started out backed by only lead guitar. It was one of Duvall's bosses at the dairy farm where he worked that suggested a slap bass would improve the duo's sound, and a drummer joined shortly thereafter. Anyone who couldn't get enough of Lonnie Thompson soon found to their unbridled delight that his twin brother Johnny Thompson had further filled out the instrumental lineup by coming on rhythm guitar.
In 1957, the group did a full round of high schools, colleges, radio stations, theaters, and sock hops. Gigs at the Majestic Theatre in Ft. Worth or the Cowtown Hoedown in Dallas are legendary; one can't even imagine how raucous these places must have been without possibly corrupting the imagination permanently. It was literally an open battle to play forbidden rock & roll at the Cowtown Hoedown, although, of course, country was okay. As the legend goes, one packed night, Duvall told the band to rock the house. Luckily, the enthusiastic crowd response prevented the management from taking reprisals. Danny Wolfe came on the scene as a collaborating singer and songwriter in the summer of 1957, helping to put together material for recording session with Challenge. The label's name sounds like the ultimate summation of the indie record business, but it was actually owned by mild-mannered cowboy star Gene Autry. Duvall's sessions were taped at the wonderful studio of Owen Bradley in Nashville, meaning he was benefiting from the same recording genius behind the classic Patsy Cline sides. Tracks cut included the under-developed "Teen Queen," the indecisive "Comin' or Goin'," the explosive "Boom Boom Baby," and "Pucker Paint," an ode to lipstick whose title is best announced through a serious windscreen. Duvall could also brag about the session players on board, including lead guitarist Grady Martin, pianist Floyd Cramer, and Buddy Harmon. Like most country artists of that era, he also turned around in the studio at one point to see the Jordanaires preparing for their background Vocals entrance. Yet, he was actually totally peeved that he was not allowed to use his own band, and thereby prevented from rocking out. This was a major disappointment for Duvall's combo, the Troublesome Three, who never played together again after that.
The following year, he again took the recording Challenge, this time at Goldstar Studios in Hollywood, quite a rockabilly haunt. He cut a classic version of "Fools Hall of Fame," a song that was also recorded by Johnny Paycheck and George Jones, as well as the economic "Friday Night on a Dollar Bill." It was during this period that Duvall claims to have sat in on sessions for the instrumental "Tequila!," and claims to have provided some of the Vocals "oohs" and "ahs." It was this record that was a huge hit, not Duvall's releases. His career went into a weird stalemate, Challenge not only refusing to promote his records, but barring him from taking other recording offers. He was allowed to sign an acting contract with Republic, but the low-budget studio never actually asked him to appear in a picture. By the early '60s, Duvall and Thompson were still playing regularly, but only regionally. From 1962 through 1969, Duvall worked with computers in Houston and also attended the university there. He named his daughter Leah after a Roy Orbison song. He continued in the computer field, until the mid-'80s with the resurgence in original rockabilly artists. Duvall began performing again in 1985, with a gig in Eindoven, Holland, followed by an extremely successful show at the Mean Fiddler in London.
Huelyn Duvall died on May 15, 2019.