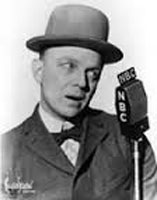 There were two great Whitey Fords during the 20th century. One was a left-handed pitcher for the New York Yankees, inducted into the Baseball Hall of Fame in 1974, and the other, Benjamin "Whitey" Ford, known as the Duke of Paducah, was one of country music's first hillbilly comedians. A longtime member of the Grand Ole Opry, the Duke of Paducah's catalog of jokes has continued to amuse audiences since being purchased by country music television show, Hee Haw.
The Duke of Paducah began his career in the early '20s as a banjo player and vocalist for the McGinty Cowboys. When leadership of the band was taken over by Otto Gray, who had previously led a string band comprised of real cowboys, it was renamed Otto Gray & His Oklahoma Cowboys. Dressed in western outfits, and white ten-gallon hats, the band became one of the most successful country & western acts of the '20s and '30s, introducing such now-classic tunes as "She'll Be Comin' Round the Mountain," "Who Broke the Lock on the Henhouse Door," and "The Cowboy's Lament." Heard on more than 140 radio stations, and in half a dozen film shorts, the group toured the Northeastern RKO and Orpheum circuits from 1928 until 1932.
The Duke of Paducah, who increasingly focused on comedy after the disbanding of Otto Gray & His Oklahoma Cowboys in 1936, remained a favorite of Grand Ole Opry listeners throughout the '40s, '50s and early '60s. He was inducted into the Country Music hall of Fame in 1986