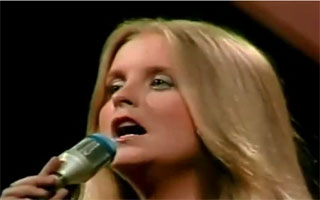 US Country singer born Dottsy Brodt, 6 April 1954, Sequin, near San Antonio, Texas, USA. In 1966, at the age of 12, Brodt was already singing in clubs in her local area as part of a trio. She reached the finals of a major talent competition on KBER San Antonio in 1969 and appeared on television in her own show. In 1972, she began to study special education (for teaching handicapped or subnormal children) at the University of Texas, but found time to form her own band, Meadow Muffin. While singing at a convention in San Antonio, she came to the attention of Happy Shahan, who gave her the chance to appear at major events with Johnny Rodriguez and helped her to get a contract with RCA Records. Her first single, ‘Storms Never Last’, written by Jessi Colter, became a Top 20 US country chart hit in 1975 and was quickly followed by Susanna Clark’s ‘I’ll Be Your San Antone Rose’. In the late 70s, she had further hits, including a Top 10 with ‘(After Sweet Memories) Play Born To Lose Again’. In 1979, Waylon Jennings played guitar and added harmony Vocalss to Dottsy’s lead when she recorded his song ‘Trying To Satisfy You’, resulting in another Top 20 hit. When it appeared that she would go on to major stardom, she decided to cut back on her singing and concentrate on completing her college education. By the early 80s she was fully involved in working with autistic and mentally retarded children. Her last chart entry was a 1981 minor hit on Tanglewood Records with the suitably descriptive title ‘Let The Little Bird Fly’.