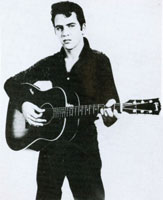 Ral Donner is the classic example of a musician who was doomed to a marginal career by the very attribute that got him public notice in the first place. In a period during which Elvis Presley was the quintessential rock & roll star, Donner was the most successful of all the Elvis sound-alikes, getting a career, a year's worth of charting singles, and years of steady work out of the fact that his singing bore an uncanny resemblance to the King of Rock & Roll's ballad style. He was never able to transcend those beginnings, however. Donner was part of American rock & roll's third wave, young enough to have been a fan of Elvis Presley when the latter first emerged nationally. Born in Chicago in 1943, he started singing in church choirs as a boy, and by his early teens was a regular competitor in local talent contests. He organized his two groups -- the Rockin' Five and then the Gents -- while still in his teens. His work with the Rockin' Five in his high school days was good enough to get them on television in Chicago, even earning a spot alongside Sammy Davis Jr. on one show. At 17, he broke through to Alan Freed's Big Beat show and, in 1959, appeared at the Apollo Theatre in New York. That same year, he cut a demo with his new group, the Gents, got a pair of sides out on a small label, and got to tour with the legendary South Carolina rockabilly band the Sparkletones. Donner was doing little better than treading water professionally, however, until a pair of Chicago producers heard his demo of "The Girl of My Best Friend," a song that Elvis Presley sang on his LP Elvis Is Back. The Presley side had been issued successfully as a single by RCA in England, but in America it was only available on the album. With a new band called the Starfires backing him up, "The Girl of My Best Friend" was re-recorded and licensed to Gone Records, the New York-based label founded by George Goldner. Suddenly, Ral Donner had a national Top 20 hit, and he sounded so much like Presley that some members of the public, utterly unfamiliar with Donner, wanted to know if he actually was Elvis Presley. This coverage in the fan magazines, though hardly serious by today's standards, was enough to keep Donner in the public spotlight while Goldner and Gone Records searched for a follow-up single, which they got in the summer of 1961 with "You Don't Know What You've Got (Until You Lose It)," which peaked at number four. Donner enjoyed another pair of hits, "Please Don't Go" and "She's Everything," over the next year, but by the spring of 1962, hit days in the Top 40 were behind him. He later left Gone Records to sign with Frank Sinatra's Reprise Records (a surprising opportunity, given that Sinatra had founded the label specifically to release his kind of music, which didn't include rock & roll). By 1965, he was at Red Bird Records, Goldner's latest music business venture, but Donner's days as a rock & roll contender were over. Red Bird folded soon after he rejoined Goldner's stable and Donner was never able to return to the charts. By the '70s, he was working in music only part-time and recording very sporadically for small labels. It took Presley's death in 1977 to revive interest in Donner's work; although he was always more dignified, and never as grotesque as the burgeoning group of overt visual Elvis imitators who began manifesting themselves soon after the singer's death, his stylistic link with Presley in his prime brought him new attention and more work than he had seen in years. Perhaps the final irony -- one hesitates to say indignity, since Donner truly admired Presley -- came when he was chosen to do the Vocals impersonation of Presley for the narration in the 1981 documentary This Is Elvis. Still, in a way, little could have been sadder -- after 20 years in music, he'd not only failed to escape Presley's shadow but had become part of its manifestation in popular culture. He died of cancer in 1984, an anomaly in music history and a footnote in popular culture.