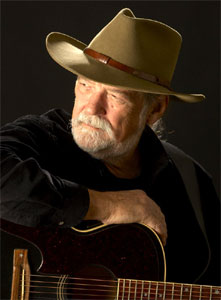 Called the "Hemingway of country music," by Nanci Griffith, who covered his tune "The Ballad of Robin Wintersmith," Richard Dobson is one of Texas' most literate songsmiths. David Allan Coe recorded his song "Piece of Wood and Steel," while Guy Clark used the tune "Old Friends," written with Dobson and Suzanne Clark, as the title track of his 1988 album.
A native of Tyler, Texas, Dobson dreamed of becoming a novelist from earliest memory. Graduating from Georgetown University in 1966 with a Bachelor of Science degree in Spanish, he spent two years in the Peace Corps in Chile, writing two novels -- Seasons and Companions and The Gulf Coast Boys -- and several articles for the British fanzine Omaha Rainbow.
His dreams of becoming a novelist were curtailed, however, by music. Playing guitar and writing songs since the age of 19, he became a regular of the late-'60s and early-'70s Texas songwriter scene that included Townes Van Zandt, Guy Clark, Mickey Newbury, and honorary Texan Jerry Jeff Walker.
Dobson's debut album, In Texas Last December, financed with money earned by working on shrimp boats and oil riggers, in 1976, included the tune "Baby Ride Easy" which was later covered as a duet by Carlene Carter and Dave Edmunds.
Continuing to record without much commercial success, Dobson moved to Europe in the early '90s. He recorded his 1999 album, Global Village Garage, in Germany. In 2003, Swiss label Brambus reissued his early recordings, and Dobson's first novel, The Gulf Coast Boys, was published in 1998.