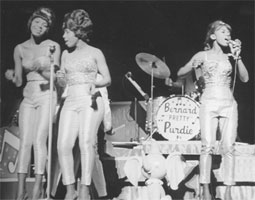 A '60s girl group, the Dixie Cups consisted of one cousin (Joan Marie Johnson) and two sisters (Barbara Ann Hawkins and Rosa Lee Hawkins). All three young ladies were from New Orleans, as was producer and singer Joe Jones, who discovered the talented threesome and took them to New York.
The trio was almost known as the Meltones -- or worse, Little Miss and the Muffets -- but the name Dixie Cups was settled on by 1964. That was the year the girls recorded the well-remembered song "Chapel of Love" on the Red Bird Records label. The number was written by Phil Spector, Ellie Greenwich, and Jeff Barry, and intended to be released by the Ronettes, Darlene Love, or the Crystals. That one single was enough to carry the group into music history. It became the Dixie Cups' biggest success, a million-seller, and a worldwide hit. A few other hits followed through 1964 and into 1965, like "You Should Have Seen the Way He Looked at Me," "Little Bell," "Iko Iko," and "People Say." A year later, Red Bird Records was out of the picture. The trio moved to ABC-Paramount, but there were no more hits, and 1966 saw the end of the Dixie Cups. There had been other singles, like "Gee the Moon Is Shining Bright" and "Girls Can Tell," but there weren't enough fans to back the releases.
In 1974, Rosa Lee and her sister Barbara Ann left New York behind to return to New Orleans and found work as models for awhile. When the sisters began to sing and tour again, their cousin Joan Marie declined to join in, so her spot was filled by Dale Mickle.