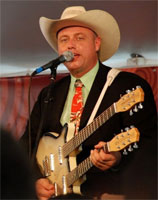 A native of Creve Coeur, St. Louis, MO, Deke Dickerson was born June 3, 1968. Growing up on a farm gave him an interesting slant on life and certainly contributed to his love of all things retro. By age 13, Dickerson's musical abilities began to show themselves. Playing in bands around his home town allowed the budding prodigy to nurture his growing talent. At 17, he and some friends from high school formed their own band, Untamed Youth, a garage band that favored surf guitar licks. During the course of time Untamed Youth was together, they operated as a national touring act and released four indie recordings while gaining a strong reputation in the Midwest. But Dickerson wanted more and moved to the West Coast in 1991. He soon became entrenched in the L.A. roots and rockabilly scene and eventually hooked up with the equally talented Dave Stuckey, another Midwesterner who had transplanted his talent to the West Coast. Together they formed one of the premier hillbilly duos to come out of Los Angeles and released two projects, the second being the highly acclaimed CD, Hollywood Barn Dance.
While with Stuckey, Dickerson's expertise as a guitarist began to evolve into the definitive Dickerson style. Part rockabilly, part surf, and rock & roll with a strong dash of the Roy Nichols jazzy style of country guitar, Dickerson put his mark on his brand of guitar playing. Sadly, he needed to move on yet again in spite of the success of Dave & Deke and the overwhelming emotional connection their audiences seemed to feel for the twosome. Parting ways was difficult and their last performance on a hot summer's evening in 1996 at Jacks Sugar Shack, located at the corner of Hollywood & Vine in Hollywood, proved to be a hearbreaking experience for the SRO crowd. Yet, Dave & Deke never sounded better. While tears were shed, both looked toward a future as solo artists.
Under the watchful eye of manager Allen Larman, the same man who guided the career of Big Sandy & His Fly-Rite Boys to success, Deke Dickerson spent the next year seeking out a band to join him on-stage and in the studio. He had a vision built upon the sounds he loved from days gone by, and found his dream band in a unit that he christened the Ecco-Fonics. Armed with his "trademark custom double-neck Mosrite guitar", Deke & the Ecco-Fonics began to meld together and played all around Los Angeles, Orange County, and the West Coast. They were featured at such roots music spectaculars as the Irvine, CA annual Fourth of July Hootenanny and the Viva Las Vegas rockabilly spectacle in Las Vegas, NV.
An accomplished engineer and studio producer, in 1998 Dickerson went into the studio in order to produce a solo project by the Fly-Rite Boys sans Big Sandy. Another critical success, Dickerson was ready to take the Ecco-Fonics into the studio and record his first solo effort. The result of those sessions in 1998 was the fall release of Number One Hit Record on HighTone's HMG label. More Million Sellers followed a year later; Rhythm, Rhyme & Truth was released in fall 2000.