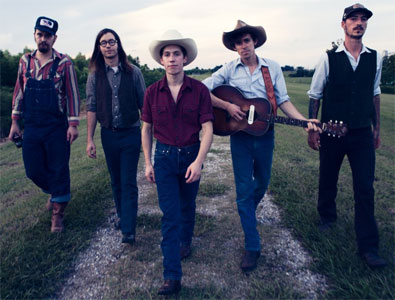 Bringing their own style of down-home, rootsy twang to the home of the blues, the Deslondes are a band of rough but tuneful troubadours who found their voice when they settled in New Orleans, Louisiana. The story of the Deslondes began when singer and guitarist Sam Doores and percussionist and singer Cameron Snyder met while the two were college students in the Pacific Northwest. Both were interested in music, and Doores found a potent source of fresh inspiration when he read Woody Guthrie's memoirs, Bound for Glory. Doores and Snyder decided to quit school and hit the road, doing some hard traveling with their band the Broken Wing Routine, and they even landed a gig at Woodyfest, also known as the Woody Guthrie Folk Festival, an annual event in Okemah, Oklahoma. While in Okemah, Doores and Snyder met some like-minded musicians, including singer and guitarist Riley Downing and bassist Dan Cutler. When the Broken Wing Routine splintered, Doores and Cutler headed to New Orleans and formed a country-influenced band called the Tumbleweeds; Snyder, meanwhile, was playing with the Longtime Goners when he met John James Tourville, who played fiddle and pedal steel. In time, Snyder, Tourville, and Downing all made their way to New Orleans, and began jamming with the Tumbleweeds at their practice spot, an abandoned high school in the Lower Ninth Ward that had been empty since Hurricane Katrina hit in 2005. The five musicians adopted a new band name, the Deslondes, taken from a street in the Lower Ninth's Holy Cross neighborhood, and they found kindred spirits in another New Orleans outfit, Hurray for the Riff Raff, with Doores and Cutler performing in both groups for a while. Between developing a loyal following at home and impressing audiences on the road opening for Hurray for the Riff Raff, word began to spread about the Deslondes, and New West Records signed the band to a recording contract, releasing their self-titled debut album in June 2015.