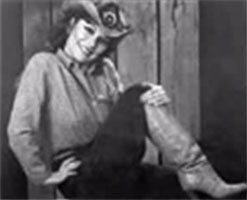 Country entertainer Penny DeHaven was born May 17, 1948, in Winchester, VA. She sang and performed on local shows as a child, but moved to WWVA's Wheeling Jamboree during the mid-'60s after high school. Using the stage name Penny Starr, she became a favorite and recorded "A Grain of Salt" for the Band Box label in late 1966. The single placed modestly the following year, and after spending two years in Wheeling, she moved to Nashville to sign with Imperial in 1969. Two of her recordings hit the Country Top 40 that year: "Mama Lou" and "Down in the Boondocks."
After a change of labels to United Artists, Penny DeHaven's biggest hit came later that year when "Land Mark Tavern" hit number 20. Though DeHaven never re-entered the Top 40 again -- "The First Love" and "Don't Change on Me" came closest in 1971 -- she continued to record for United Artists and later Mercury, Starcrest and Main Street. She appeared in several films in the early '80s, and sang "Bayou Lullaby" for the soundtrack to 1982's Honkytonk Man. DeHaven has also guested on the Grand Ole Opry several times
Penny DeHaven passed away on February 23, 2014.