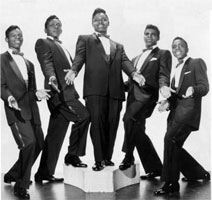 With their debut single "One Summer Night," the Danleers became one of the most successful Vocals groups of the late '50s. Written by the group's songwriter/manager Danny Webb and recorded during their first recording session, the tune reached the pop Top Ten and sold over a million copies. the Danleers were one of many Vocals groups that arose out of the street corners, playgrounds, and tenement hallways of Brooklyn. Originally a quintet, featuring lead singer Jimmy Weston, baritone singer Nat McCune, bass Vocalsist Roosevelt Mays, and tenors Johnny Lee and Will Ephraim, the band's sound was reinforced by the addition of Webb.
Initially released on the Amp-3 label, "One Summer Night" quickly became a local hit and attracted the attention of Mercury, who reissued the tune in June 1958.
After performing at Alan Freed's Labor Day Extravaganza at the Brooklyn Fox Theater, the Danleers were invited to join Frankie Avalon, Bobby Darin, Eddie Cochran, Connie Francis, Dion & the Belmonts, Buddy Holly & the Crickets, Clyde McPhatter, and the Coasters in a nationally touring road show.
"One Summer Night" marked the last success for the Brooklyn-based group, however. After three attempts to recapture the momentum of "One Summer Night" failed, the group was dropped by Mercury. Reorganized, with different personnel, by Weston, the Danleers released two singles in the mid-'60s that failed to revive their early success.