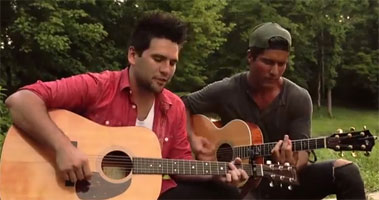 Delivering a bright, polished sound that owes as much to contemporary pop as anything in the classic country handbook, Dan + Shay is the country singing and songwriting duo of Dan Smyers and Shay Mooney. Both began playing music as teenagers, with Smyers (born and raised in Wexford, Pennsylvania) discovering songwriting at the age of 14 then learning the guitar at the age of 16, and Mooney (born and raised in Natural Dam, Arkansas) began writing and playing music at the age of 12. The pair met in Nashville in December of 2012 and immediately began writing songs and performing together. Developing a bright and contemporary country pop sound, the duo was signed to Warner Bros. Nashville, which released an infectious debut single, "19 You + Me," a song the duo wrote with Danny Orton, in the summer of 2013. In the spring of 2014, Dan + Shay dropped their debut album, Where It All Began, which included "19 You + Me" and eleven other tunes.