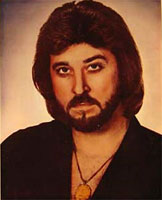 US Country singer born Kenneth Dale Eoff, Jr., on October 3, 1951 in Artesia (New Mexico). Kenny Dale didn't turn to music until he was in his twenties but, with the release of his debut single, "Bluest Heartache Of The Year", he made up for lost time. Released in 1977, the tune became a major country hit and established Dale as a promising young country voice. Although unable to match the song's success, Dale continued to release impressive recordings including "Shame Shame On Me", "Red Hot Memory" and "Only Love Can Break A Heart".
A regular performer at Fiddlin' Frenchie Burke's club in Houston, Dale performed on the local club circuit with his band, Love Country. He currently resides in Nashville, appearing regularly at the Nashville Nightlife Breakfast and Dinner Theater.
Kenny Dale passed away on July 15, 2020 in San Antonio, Texas.