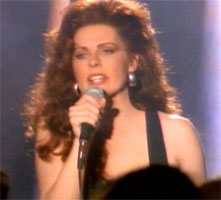 Country-pop singer/songwriter Bobbie Cryner issued her honky tonk-flavored self-titled debut LP in 1993 to widespread critical acclaim, but when the record failed commercially, she was dropped by her label. Following a divorce and a battle with alcoholism, she returned in 1996 with Girl Of Your Dreams, a smoother, more sophisticated effort spotlighting Cryner's gift for singing — and writing — ballads.