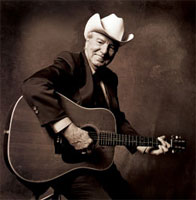 A teenage Jack Cooke told his sister "I'm never going to work. I'm going to let this guitar do it for me." In hindsight, it may seem prophetic and not teenage folly, but it was actually the bass that turned the Virginia native into one of bluegrass' most revered musicians. Cooke got his start in 1955 when he backed Carter and Ralph Stanley in the Stanley Brothers' backup band, the Clinch Mountain Boys. A year later he began a four-year stint in Bill Monroe's Bluegrass Boys, this time doing double duty on Vocalss. In 1960 he formed his own band, the Virginia Mountain Boys, and spent the next decade leading the group -- which at one point claimed the distinguished Del McCoury as a member -- while moonlighting in Earl Taylor's band along with the Stoneman Family. In 1970 he reunited with Ralph Stanley, formed a new Clinch Mountain Boys, and stuck with the band through numerous tours and recordings. He was still a member of the band in 2006 when he decided to moonlight once again and release the solo album Sittin' on Top of the World. The album was produced by Jim Lauderdale and released on the Pinecastle label. Jack Cooke died on December 1, 2009.