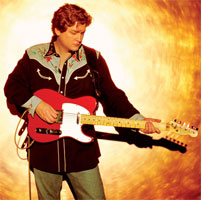 Country singer/songwriter Shawn Camp spent his early years on a farm outside of Perryville, AR. His father was an ironworker and his mother a beautician. Both sang and played guitar, infusing their child with a love of music; he began playing guitar himself at five. At the age of 20 in January 1987, he moved to Nashville to become a professional musician. He first found a berth as a fiddle player for the Osborne Brothers, and subsequently moved on to the backing bands for Jerry Reed, Alan Jackson, Suzy Boggus, Shelby Lynne, and Trisha Yearwood. In 1991, he left Yearwood to become a solo performer. He was signed to the Reprise division of Warner Bros. Records, which released his debut single, "Fallin' Never Felt So Good," in 1993. It entered the country charts that July and peaked in the Top 40 in October. That month, Reprise released Camp's first album, Shawn Camp, which spent several weeks in the country charts. A second single, "Confessin' My Love," peaked in the country Top 40 in January 1994.
Camp recorded a second album for Reprise, but the label rejected it and dropped him. He turned to working as a session musician, appearing on albums by John Prine, Garth Brooks, Nanci Griffith, and Guy Clark, among others, over the rest of the decade. At the same time, he co-wrote songs that were covered by many artists, including Diamond Rio, Tracy Byrd, Kenny Chesney, John Anderson, and Randy Travis. "Two Pina Coladas," which he co-wrote for Garth Brooks, appeared on Brooks' Sevens album and hit number one on the country charts in May 1998, and "How Long Gone," which he co-wrote for Brooks & Dunn, hit number one on the country charts in September 1998. Camp self-released his second album, Lucky Silver Dollar, in July 2001. This set was followed by Live at the Station Inn in 2004, Fireball in 2006, and The Bluegrass Elvises, Vol. 1 with Billy Burnette in 2007. In 2009, Warner Music Nashville President/CEO John Esposito caught Camp at a guitar pull during a music conference and was knocked out. Discovering that Warner had Camp's unreleased second album in its vaults, he had the label release the album in 2010 (now entitled 1994), to coincide with a reissue of his 1993 debut for Reprise.