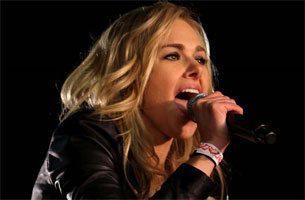 Actress and singer Laura Bell Bundy seems to split her creative energies between Broadway, where she has had a number of roles, and Nashville, where she is equally gifted as a country singer. Born April 10, 1981 in Lexington, KY, Bundy was first drawn to dance as a child, and began working in regional theater when she was only nine years old. She starred in the off-Broadway musical Ruthless! The Musical before making her Broadway debut in Hairspray in 2002. It all seemed to agree with her, and she next starred on Broadway in 2007 and 2008 in Legally Blonde: The Musical. Bundy also appeared in several films, including The Adventures of Huck Finn (1993), Life with Mikey (1993), and Jumanji (1995), and in the television shows The Guiding Light, Veronica Mars, Happy Hour, Modern Men, Cold Case, and Strangers with Candy. She released a debut album, Longing for a Place Already Gone, in 2007, and after signing with Mercury Records Nashville, she released a second album, Achin' and Shakin', in 2010.