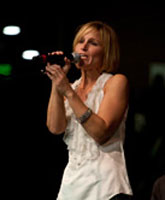 Susan Rae Hill was born in Irving, TX, on July 17, 1967. The adult contemporary Vocalsist's first single — recorded using her mother's maiden name of Ashton to avoid confusion with Kim Hill — gained an audience with CCM radio listeners around America in 1991, and made her album Wakened by the Wind the biggest-selling debut in the history of the Sparrow label. Ashton reached number one in the Christian charts two more times that year, received a Dove award for New Artist of the Year and won a CCM readers and reporters poll for Best New Artist. Her second album, Angels of Mercy (1992), proved her staying potential: it spawned four CCM number one singles and was nominated for a Grammy in the Best Pop Gospel Album category. Ashton won the 1993 CCM readers award for Favorite Inspirational Album and a reporters poll for Best Female Artist. She narrowly missed capturing Dove awards for Female Vocalsist of the Year, Inspirational Recorded Song of the Year and Contemporary Album of the Year. Also in 1993, Susan Ashton married John David Cunningham and released her self-titled third album, with two singles charting number one. She was nominated for a 1994 Dove award in the category Female Vocalsist of the Year. Ashton also branched out that year, recording Down the Road with Margaret Becker and Christine Dente. That album was voted the Favorite Inspirational Album and Favorite Vocals Event in the 1995 readers' polls, and was nominated for Dove awards in the Group of the Year and Recorded Music Packaging of the Year categories. Ashton herself was nominated for Female Vocalsist of the Year. Susan Ashton's collection of hits, So Far...The Best of Susan Ashton Volume 1, appeared in 1995. The following year, Ashton signed with Chordant and released Distant Call. Closer, her debut for Capitol, followed in mid-1999.