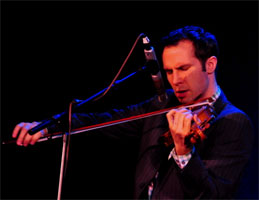 Singer and songwriter Jake Armerding draws on a wealth of influences in his music — contemporary folk, progressive bluegrass, classic folk-rock of the '60s, and singer/songwriters of the '70s and '80s — but he prefers to classify his music in a simple fashion: good. "We're going for good," he says. "Good is our sole criterion." Jake Armerding was born in Massachusetts, where his father, Taylor Armerding, was a noted journalist and musician who played for several years with the progressive bluegrass band Northern Lights. Jake picked up a guitar when he was a boy, and by the time he was 14 he was good enough to sit in with Northern Lights on-stage. Jake also learned mandolin and violin and started writing songs, and while studying English at Wheaton College, a Christian college in Illinois, he found time to record an album, 1999's Caged Bird, which he distributed himself. Caged Bird sold out its initial pressing of 1,000 copies through positive press and word of mouth, and earned him the "Best New Artist of 2000" award from Boston's WUMB-FM. After graduating, Jake relocated to Nashville in hopes of shifting his musical career into high gear; while he didn't care for life in music city and soon returned to Boston, he stayed just long enough to score a contract with the noted independent label Compass Records, which released his self-titled second album in 2003. Four years later, after he'd established a strong following on the Massachusetts folk scene, Jake self-released his third disc, Walking on the World, in the spring of 2007.