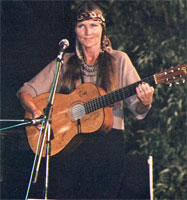 Rattlesnake Annie was born Rosan Gallimore and raised on her family's cotton and tobacco farm near Puryear, Tennessee. Her father was a renowned blues and country singer, and in her spare time Annie began writing poetry and learning to play the guitar. When she was about 12, she and two cousins formed the Gallimore Sisters and performed professionally at local churches and political rallies, as well as funerals. In 1953, the Gallimores appeared on TV in Paris, Tennessee and won first prize and a chance to appear on the Grand Ole Opry in a statewide talent contest. After high school, the girls went their separate ways.
At age 16, Annie set out alone for Memphis and then to Huntsville, Alabama, where she regularly performed at the Carriage House. She moved to Texas near the end of the '60s and married the man who would become her manager, Max McGowan. She met Willie Nelson in 1969 and they became friends, sometimes trading songs. She earned the nickname "Rattlesnake" from her refusal to allow the killing the snakes on her ranch as per her Cherokee descent, where the rattler is a healing symbol, and released her first single, "Texas Lullabye," in 1974. She later released her critically acclaimed debut Rattlesnakes & Rusty Water; the album did nothing in the U.S. but enjoyed popularity in Europe. She recorded with Nelson in 1982 and subsequently toured the U.S. with Floyd Tillman.
In the mid-'80s Annie returned from a stay in England and recorded Country Livin'. She returned to Europe and became the first female country singer to play the Eastern Bloc countries. While in East Germany, she appeared on television, and in Czechoslovakia made an album with Czech country singer Michael Tcny, Rattlesnake Annie & the Last Cowboy. In 1987, she finally won recognition in the U.S. when she and Rick Blackmon produced her self-titled album. One of the cuts, "Goodbye to a River," became the anthem of the West German chapter of Greenpeace, while two other cuts became minor chart hits in the U.S. In 1991, Rattlesnake Annie became the first American country performer to sign to Sony Music Japan and recorded several albums for the label, including Painted Bird (1993).