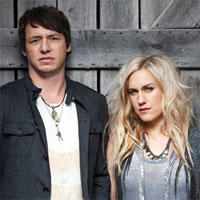 American Young is the country singer/songwriter duo of Kristy Osmunson and Jon Stone, both of whom had some success as Nashville songwriters before joining forces in 2013. Osmunson, a fiddle player, had been a member of the group Bomshel and had her songs recorded by Jory + Rory, among others, while Stone was an in-demand producer who had written songs recorded by Rascal Flatts, Kenny Chesney, Blake Shelton, and others. Initially the pair were looking to write some songs together, but their chemistry when they sang made it obvious they had to give the performing end a try. Their debut self-titled EP appeared in 2014 from Curb Records, led by the singles "Love Is War" and "Wasn't Gonna Drink Tonight." A full-length album, called AY, appeared in 2016.
American Young returned to action in 2019 with the EP Soundtrack of Your Life.