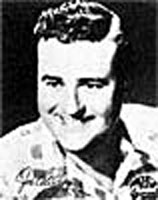 Although he is best-known to country fans — if he is known at all — as the writer of hits by Jim Reeves, Tex Ritter and Faron Young, Joe Allison contributed immeasurably to country music's birth as an urban phenomenon during the 1950s and '60s. He began as a deejay in Texas, but worked his way up during the '50s — as a TV presenter, producer and record executive — to influence the spread of country and its impact on the nation. Born in McKinney, TX, on October 3, 1924, Allison entered the business performing on a Tex Ritter tour in 1945. He returned to his home state that same year and began to work as a deejay in San Antonio. A song he wrote for Ritter, "When You Leave Don't Slam the Door," hit the Country Top Five in October 1946.
With a bit of fame to his name, Joe Allison worked in Memphis radio during the late '40s. In 1949, he moved to Nashville to host a daily show on WSIX and WSM that became a springboard for future stars such as the Everly Brothers, Chet Atkins and Brenda Lee. After a move to Los Angeles in 1952, Allison balanced radio and songrwriting careers; he replaced Tennessee Ernie Ford at KXLA and wrote hits — some co-written by his first wife, Audrey — for Faron Young ("Live Fast, Love Hard, Die Young" and "It's a Great Life [If You Don't Weaken]") and Tommy Sands ("Teenage Crush"). Joe Allison's most important songwriting credit came in 1960, when Jim Reeves took "He'll Have to Go" to the top of the Country chart for 14 weeks. The single reached number two on the pop charts also.
Also in 1960, Allison moved to an executive post for Liberty Records: developing and running the first specifically Country department at a record label. During the '60s, Allison was influential in spreading commercial country radio to big urban markets and he was also involved in the founding of the Country Music Association, enough to earn their achievement award in 1964. By 1967, he had moved into independent producing and worked on material by Hank Thompson, Roy Clark, Tex Ritter and Willie Nelson. In the late '70s, he was inducted into both the D.J. Hall of Fame and the Nashville Songwriters Hall of Fame.