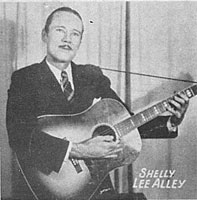 During the '30s and '40s, Shelly Lee Alley and his Alley Cats were one of the most prominent Western Swing bands in Texas. Born in Alleyton, Texas, singer/songwriter/fiddle player Alley began his career as the leader of a San Antonio army camp orchestra during World War I. Following military service, he went on to lead several small orchestras, which played on radio stations throughout the Lone Star State. During the early '20s, Alley was primarily interested in pop and jazz music and belonged to several small combos, including the Dixie Serenaders, which played at a Dallas radio station. In addition to performing and conducting music, Alley was also a songwriter. One of his early songs, "Travelin' Blues," became a Depression-era hit for Jimmie Rodgers; its success turned Alley more towards country and western music, and he joined a Fort Worth radio show called "The Chuck Wagon Gang." He formed the Alley Cats in 1936 and played radio stations and local dances in the Houston and Beaumont area. The Alley Cats recorded several sessions for the American Record Corporation on the VOCALION label. Some Alley Cats members, such as Ted Daffan and Leon Selph, went on to form their own successful bands. In 1941, Alley cut a single for Bluebird, and also continued writing songs, many of which were recorded by Jimmie Davis. During World War II, the Alley Cats broke up and Alley began playing with Patsy and the Buckaroos. He got the Cats back together and cut a single for the Globe label, but the group disbanded for good around 1946. Alley still played his fiddle occasionally and wrote songs; his stepson, Clyde Brewer, went on to become a popular Western Swing musician in his own right.