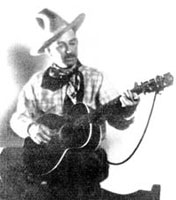 Jules Verne Allen was one of a handful of authentic and documented cowboy singers and writers -- along with Carl T. Sprague -- who lived the life that his songs dealt with. He also learned those songs before radio and records carried them to the world, when they were still part of an oral tradition. A cowboy from the age of ten, and a participant in cattle drives until the end of the first decade of the new century, Allen began singing as an amateur for the pleasure of his fellow cowboys.
After a stint in law enforcement, including a possible period as a Texas Ranger, and service in the army during World War I, he began working as a professional singer in the 1920s and was appearing on radio in Dallas, San Antonio, and Los Angeles by the end of the decade, sometimes under various pseudonyms, including Longhorn Luke. Allen began cutting music for Victor starting in 1928, and cut a total of a dozen sides for the company that year and the next. He cut what were among the earliest known versions of "The Cowboy's Dream," "Home on the Range," and "Days of Forty-Nine." His recording of "The Dying Cowboy," more familiar as "Oh Bury Me Not on the Lone Prairie," is one of the more notable authentic oral tradition-derived versions of a song dating, in that form, at least since the 1830s.
Allen was also a composer and writer in his own right, and published Cowboy Lore, a collection of three dozen songs accompanied by details about cowboy life, in 1933 -- it has been reprinted several times, most recently in 1971, some 26 years after his death. 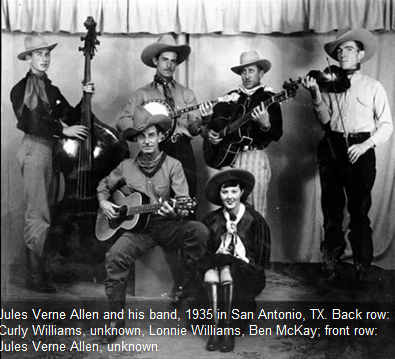