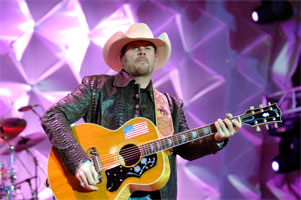 Gary Allan hit the honky tonk circuit in his native Southern California at the seasoned age of 12. Playing in and out of the smoky, sweaty bars with his dad's band led Allan to follow in his father's footsteps and start his own band. When Allan returned to those same honky tonks with his own combo, the sound was true Bakersfield country: Merle Haggard, Buck Owens, and the rest. Allan spent most of his twenties honing his skills as a new traditionalist country singer; finally, in 1996, he was picked up by the Decca label. Used Heart for Sale appeared that year, and even if it was a bit timid, the album established Allan as a talented performer with plenty of potential. Two years later, he returned with It Would Be You. This time out, Allan suffered from slick Nashville production, which winnowed away most of his whiskey-soaked barroom charm. Nevertheless, Allan's talent shone through. In 1999, Decca closed its doors. However, Allan's contract was picked up by MCA, which released his Smoke Rings in the Dark later that year. The album combined most of what Allan did best — dusty honky tonk, cracked country ballads — into a solid effort that didn't get too heavy with the Music City sheen. The album even included a rousing cover of the Del Shannon classic "Runaway" that harked back to Allan's younger days on the honky tonk circuit. With 2001's Alright Guy, an accomplished mix of driving, dusty swagger and slow-burn croon, Allan proved that he was only getting better with age. Its single, "Man to Man," became the singer's first number one hit. Allan toured extensively in support of Alright Guy before beginning work on a follow-up album, and when See If I Care appeared in September 2003, it was another solid set of Bakersfield-derived country and poignant balladry. Tough All Over, a Top Ten hit, arrived in 2005. A greatest-hits collection was issued early in 2007, followed by a new studio project, Living Hard, later in the year. The single "Today" arrived in June 2009 and debuted on the chart at number 52, and was followed by the album Get Off on the Pain in early 2010. After a world tour and a rest, Allan went into the studio to record in 2012. The single "Every Storm (Runs Out of Rain)," appeared in September of that year, climbing to number one on the Billboard Country charts just after the January 2013 release of its accompanying album Set You Free.
Allan released a succession of non-LP singles in the mid-2010s -- "Hangover Tonight" appeared in 2015, "Do You Wish It Was Me?" showed up the following year, "Mess Me Up" came out in 2017 -- and none cracked the Country Airplay Top 40. Allan finally released Ruthless, the sequel to Set You Free, in 2021.