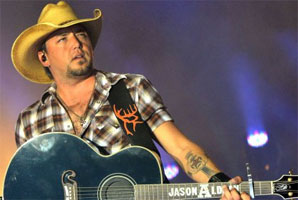 Country singer and guitarist Jason Aldean was born in Macon, GA, in 1977. His parents separated when he was three years old, and he spent his childhood with his mother in Macon through the school year while spending the summers with his father in Homestead, FL. He fell early under the spell of country music and made his first public appearance as a singer at a VFW hall in Macon when he was 14 years old. Soon he was a regular at area talent contests, and a year later he joined the house band at Nashville South in Macon. Aldean began pursuing a music career on a full-time basis following his graduation from high school and, with his father as a booking agent, was soon gigging in college towns throughout the Southeast and up and down the Eastern Seaboard. Aldean privately financed an eight-song CD during this period to sell at shows, recording it in Nashville in 1996. Michael Knox spotted Aldean at an Atlanta showcase a year or two later, and signed the singer to a songwriting contract with Warner-Chapell Publishing, which allowed Aldean to move to Nashville in 1998. When a couple of recording deals fell through and his songwriting contract was about to expire, Aldean was on the verge of giving up on the music business when he attracted the attention of the independent label Broken Bow Records, which released his debut album, simply called Jason Aldean, in 2005. Aldean returned to the studio in January 2007 to work on his sophomore release, Relentless. The album, featuring the single "Johnny Cash," hit stores in May of that year.
Wide Open followed in 2009 and its success established Aldean as a major country star. It had three number one singles -- "She's Country," "The Truth," and "Big Green Tractor," which crossed over to the pop Top 20 -- and "Crazy Town" was nearly as big, peaking at number two. Aldean upped the ante with 2010's My Kinda Party, an album that was even bigger than its predecessor thanks to the number one singles "Don't You Wanna Stay," "Dirt Road Anthem," and "Fly Over States," plus "Tattoos on This Town" and "My Kinda Party," both of which peaked at number two.
All of this raised expectations for Night Train, Aldean's fifth album, which arrived in the fall of 2012. Featuring the hit singles "Take a Little Ride," "Night Train," and "When She Says Baby," Night Train was another number one hit for Aldean. He followed it up in 2014 with Old Boots, New Dirt, which also entered the Billboard Top 200 and country charts at number one, partially due to the momentum of the hit single "Burnin' It Down." Old Boots, New Dirt generated three other Top Ten hits -- "Just Gettin' Started," "Tonight Looks Good on You," and "Gonna Know We Were Here" -- that kept it on the charts into 2015. The next year, he delivered his seventh studio album, They Don't Know, whose September 2016 release was preceded by the singles "Lights Come On" and "A Little More Summertime."
In October 2017, while Aldean was on-stage performing at the Route 91 Harvest Festival on the Las Vegas Strip, a gunman began firing on the assembled crowd, resulting in the deadly mass shooting that took the lives of many of the singer's fans. Aldean managed to escape unharmed and appeared the following weekend on Saturday Night Live performing a cover of Tom Petty's "I Won't Back Down." In January 2018 he released "You Make It Easy," the lead single from his forthcoming Rearview Town album. Completed prior to the Vegas tragedy, Rearview Town appeared in April 2018. Rearview Town spawned four Country Airplay Number Ones—"You Make It Easy," the Miranda Lambert duet "Drowns the Whiskey," "Girl Like You" and its title track—that kept the album on the airwaves into 2019. In November of that year, Aldean returned with his ninth album, 9.