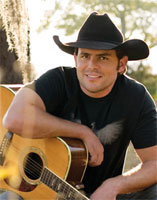 With his Top Five single "That Ain't My Truck," Rhett Akins became a sensation, however briefly, in the summer of 1995. Like many new country singers, he wasn't able to follow the record up with an equally successful second record, but he managed to cultivate a following of dedicated fans.
Aikins grew up in Valdosta, GA, learning to play guitar and forming his first band with his two younger brothers by the time he was 11. In 1992, he moved to Nashville, where he began singing on demos, as well as securing a publishing deal of his own. Eventually, Decca Records secured a demo of one of Akins' songs and the label offered him a contract.
A Thousand Memories, Akins' debut album, was released in 1994. After his first two singles — "What They're Talkin' About" and "I Brake for Brunettes" — cracked the Top 40, "That Ain't My Truck" became his breakthrough hit, rocketing to number three in the summer of 1995. "That Ain't My Truck" became his signature song and helped the album become a hit. For most of 1995, he toured as Reba McEntire's opening act, performing a few dates as a headliner as well.
In the summer of 1996, Akins released his second album, Somebody New. Although the record sold well initially, it quickly fell out of the Top 40. He returned in January 1998 with his third album, What Livin's All About. He signed with Audiom Records for 2002's Friday Night in Dixie and later with BNA Records for 2006's People Like Me.