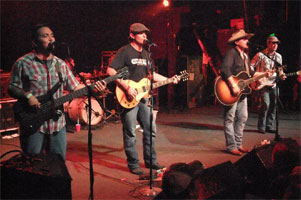 Favoring a style of country music that owes as much to the band’s native Texas as the genre’s Nashville headquarters, the Josh Abbott Band began taking shape in 2004. While studying communications at Texas Tech, frontman Josh Abbott began making trips to the Blue Light, a club in downtown Lubbock that helped launch the careers of regional luminaries like Cross Canadian Ragweed and Ryan Bingham. Inspired by the rough-and-tumble “Texas country” bands that regularly played the venue, he started writing his own songs and playing them at local bars, using members of his fraternity to form an early incarnation of the Josh Abbott Band. One of the group’s first songs, “Taste,” became a hit on local radio, prompting Abbott to drop out of school, shuffle the band’s lineup, and record their debut album Scapegoat.
With Scapegoat still generating a good amount of local buzz, the Josh Abbott Band returned in 2010 with She’s Like Texas, a strong sophomore album featuring Nashville Star finalist Kacey Musgraves on the lead single “Oh, Tonight.” The song debuted at number 59 on the Hot Country Songs chart, earning some buzz outside of the Lone Star State and prompting the band to tour the country.