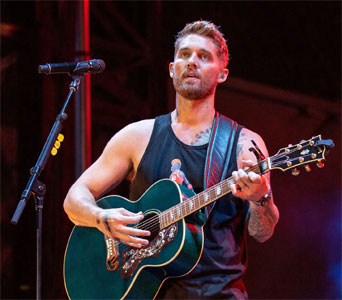 A singer and songwriter whose music balances the sophistication of contemporary pop with the emotional palette of modern country, Brett Young was born and raised in Orange County, California, and was a teenager when he first developed a love for music by learning to play guitar. In the late '90s, Young was a student at Costa Mesa's Calvary Chapel High School, and he volunteered to help the school's worship leader with performances on Friday mornings. One day, the music leader was out of town, and Young ended up taking his place. The experience convinced him he had what it took to perform in front of an audience, but even as his confidence grew, his first loyalty was to sports. Young was a star pitcher on Calvary Chapel High's baseball team, and in his senior year he helped the team achieve a 28-1 record and took them to the CIF championships, chalking up 130 strikeouts and a 0.90 ERA that season.
Young was being scouted by the majors during his high school days, but his baseball career came to an end in college when a serious elbow injury spoiled his pitching arm, and he began exploring music again. Influenced by Gavin DeGraw, Young began writing songs and making use of his rich, soulful voice. By 2007, he was appearing regularly at California listening rooms, and he'd released his first record, a self-titled EP. In 2011, Young released a second independent effort, Make Believe, and On Fire followed in 2013. After Young's first decade in the business, he'd appeared at some of California's most prestigious venues, including the Troubadour, the Roxy, and the Viper Room, and had opened for the likes of Colbie Caillat and Katy Perry.
As Young began bringing forward the country-influenced side of his music and songs, he left California for Nashville, Tennessee and celebrated the move with an EP titled Country in California. Young's new sounds attracted the attention of the powerful Nashville-based label Big Machine Label Group, which signed him to a record deal. Young's debut for the label, a six-song EP titled Brett Young, was released in February 2016. His single "Sleep Without You" fared well on both the country and pop charts, reaching number 81 on the Billboard Hot 100. Another hit, "In Case You Didn't Know," followed before the release of his eponymous Big Machine debut in February 2017. The album hit number two on Billboard's Top Country Albums chart, eventually going platinum.
In September 2018, Young released "Here Tonight," the first single from his follow-up album Ticket to L.A., which also included the track "Chapters" with Gavin DeGraw. Upon release, the set topped the U.S. Country Albums chart and rose into the Top 20 on the Billboard 200. 2020 saw Young issue the single "Lady," which was written for his wife and baby girl. He followed that song up with "I Do," a duet with pop star Astrid S.