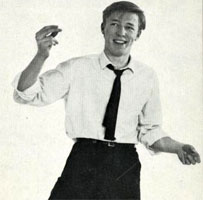 Actor/singer/director Mike Sarne carved a peculiar niche for himself in the British rock & roll of the pre-Beatles era. Born Michael Scheur, and of part-German descent, he acted in a few movies at the dawn of the '60s. His multilingual skills not only served him as an actor but brought him into the music industry -- Sarne was responsible for providing the phonetic transcriptions that were used to guide such singers as John Leyton and Billy Fury in cutting German versions of their hits for that market. Sarne, who also played guitar and sang, was signed by Leyton's manager, Robert Stigwood. In 1962 he enjoyed a novelty hit, "Tell Me What," recorded in tandem with Billie Davis (another Stigwood discovery). His subsequent singles included "Come Outside," "Just for Kicks," and "Code of Love." Since the early '60s, Sarne has concentrated largely on his screen career.