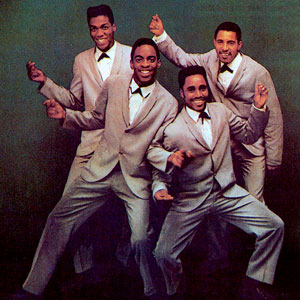 The Olympics were one of the great L.A.-based acts who managed to score regional hits on the West Coast by balancing upbeat and often humorous novelty R&B tunes with those about popular dances of the day (some of the other West Coast groups who fit this description were the Jay Hawks, the Cadets/Jacks, the Marathons, and the DooTones). They are perhaps best remembered for their Coasters-derived "Western Movies," but their other L.A.-area hits include the popular dance number "Baby Hully Gully," "Big Boy Pete" (which stalled out at number 50 pop, but went to number ten R&B), and "Mine Exclusively."
The Olympics' original lineup -- raspy baritone Walter Ward (who sang lead), Eddie Lewis (tenor), Charles Fizer (baritone), and Walter Hammond (baritone) -- started out as Walter Ward & the Challengers, waxing "I Can Tell" in 1958. All three baritone leads rarely exploited their low range, preferring to sing in shrill high tones. They changed their name to the Olympics shortly thereafter, hooking up with the songwriting team of Fred Smith and Cliff Goldsmith, who wrote and produced the act's first hit in 1958 for Si Aronson's Hollywood-based Demon Records. "Western Movies," a Coasters-type novelty number, caught on quickly, right around the same time that all of America was preoccupied with Western-themed movies and TV shows. The single climbed to number eight pop and number seven R&B in 1958.
The Olympics then moved -- along with Smith and Goldsmith -- over to the Arvee label in 1959. For their numerous A-sides (for several labels), the Olympics preferred to issue inner-city generated dance ditties, including the Smith/Goldsmith-penned "(Baby) Hully Gully," " "The Philly Dog," "The Slop," and "The Duck" (a local hit for Jackie Lee [aka Earl "Chip" Nelson]). The group only occasionally performed ballads, like the doo-wop inspired "Stay Where You Are," and a few rockers like "Shimmy Like Kate" and "Dance by the Light of the Moon." Mostly, the Olympics attempted to duplicate their hit status with novelty songs along the lines of "Western Movies."
Their biggest success in the novelty realm was their remake of "Big Boy Pete," written and first recorded by Don & Dewey for Specialty. Other regional hits included "Little Pedro," "Little Dooley," and "Big Chief Little Foot" (which featured "war whoops"). Others, like the humorous "Dodge City" and "(I Wanna) Dance With the Teacher" sound like teenage West Coast Americana at its most innocent (though at the time, extremist church groups saw nothing innocent about this type of material and often complained that their lyrics were the work of the devil).
Several members of the Olympics also recorded a cover of the Marathons' hit "Peanut Butter," which had been a hit for their producer H.B. Barnum in 1961, waxed for the Checker label. The song was essentially a rewrite of the Olympics' "(Baby) Hully Gully." Arvee sued and acquired the "Peanut Butter" master through contract-infringement litigation. They then rounded up some more singers (including a few Olympics) to record "Peanut"'s successor and album tracks. What makes this more confusing was the fact that the Marathons had some, if not total, personnel overlap with the Vibrations on Checker (who had in 1956 been known as the Jayhawks, who recorded "Stranded in the Jungle" for Flash Records). The same group also performed on-stage as the Marathons. This initially has caused confusion as to whether the two group's shared the same lineup and who did which song and who was in which group at what time.
In total, Arvee released three albums by the Olympics -- Doin' the Hully Gully (1960), Dance by the Light of the Moon (1961), and Party Time (also 1961).
After the Olympics left Arvee, they scored a couple of hits in 1963 on the L.A.-based Tri-Disc label: the rollicking dance ditty "The Bounce" and "Dancin' Holiday," both produced by Fred Smith. In 1965, they moved over to the Loma label and recorded "Good Lovin'," which failed to connect, but a year later it was remade into a giant hit by the Young Rascals for Atlantic.
In 1966, the Olympics signed with Mirwood, the label run by ex-Vee-Jay executive Randy Wood (and not the Randy Wood from Dot Records). They recorded two hits: "(Baby) Do the Philly Dog" and the gospel-drenched East-side soul single "Mine Exclusively," which inched into Billboard's Hot 100 chart, reaching number 99 in May 1966. Sensing a resurgence of interest in the group, Wood decided to put out an album by the Olympics, but since he had only two minor hits, he opted to have them re-record their old hits from Demon, Arvee, and Tri- Disc for an album called Something Old, Something New. (These re-recorded versions have often been included in a vast majority of the reissues and various artist albums where the Olympics appear, much to the annoyance of collectors.)
Over the remaining years, the Olympics spawned a host of similar groups (the Contours, the Five Dutones, Bull & the Matadors), though they continue to perform at oldies revival shows and around the country. The quartet consists of two original members, Walter Ward and Eddie Lewis. Charles Fizer passed away in 1963 and Walter Hammond retired. Their replacements William DeVase and Kenneth Sinclair have been with them for over 20 years. After working with the Olympics, Fred Smith worked with Little Caesar & the Romans, and he and Goldsmith later formed Keyman Records. Goldsmith died June 14, 1991, in Burbank, CA.