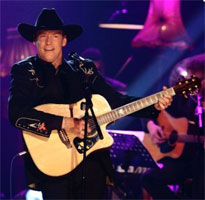 Robert Mizzell (born July 21, 1971), Born in Louisiana, the Bayou State, Robert has made his home in Ireland for almost a decade. He served his apprenticeship in Country Music since he first arrived here and is now one of the top Country artists in Ireland, his popularity spreading with extensive airplay in Europe and such distant territories as Australia. As anyone who ever attended a Robert Mizzell show will testify, Robert with his band The Country Kings put on an energy filled show. Brimming with Country flavour his shows appeal to audiences in Nashville and wherever Country Music is popular.
"Kick Ass Country" written by Tommy Swarbrigg was Robert’s first major hit making him a household name in Ireland. "Say You Love Me" is a song synonymous with Robert and its immense popularity dictates that it’s requested at all his shows.
Robert’s first three albums were entitled "Hello Mr. DJ", "Louisiana Man", "Looking Lucky". His last recording "Waltzing With Me" included the hit single "Who’s Gonna Dance With Sally Ann". "Looking Lucky" (the American release entitled "Place Beyond The Sun") was recorded in Nashville, Tennessee and contained all original country songs written by Irish and American songwriters.
Songs like "Dance With My Father" and "Home" exemplify Robert’s talent as an interpreter of songs. They come from a different genre but Robert instinctively imbues them with a country feel making them appear native to the country genre.
Not merely content with recording his latest album and touring with his band, The Country Kings, Robert is in the process of recording his first DVD, due for release in 2008.
His song "Don't wake me up ('Till we touch down in Shannon)" peaked at # 5 on the European country charts the week of June 13th, 2007, according to the weekly charts from the European CMA covering all the European market. This song has been released by both the Hillcrest label (Canada) and Hotdisc (UK).
A promotional single entitled "A Friend In Need" was released in Ireland on 22nd October 2007. The single was written by UK Songwriter/Performer Dave Sheriff. It was the first single to be taken from Robert's upcoming new album. A second promotional single entitled "Next To Me, Next To You" was released to radio stations in the Europe and Australia on 15th January 2008. This was the second single to be taken from Robert’s forthcoming album due for release mid-February 2008.