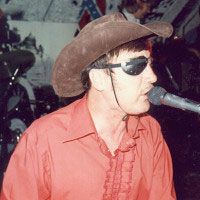 One of British rock ’n’ roll’s most colourful characters is Freddie ’Fingers’ Lee, a guy who never lost the true spirit of rock ’n’ roll. Freddie’s career started in the fifties as a guitarist in a skiffle group, playing between films on the Star Cinema circuit. His life profoundly changed in 1957, when Jerry Lee Lewis released ’A Whole Lotta Shakin’ and that inspired him to take up the piano. Freddie said, "All I had heard as a kid was Winifred Atwell and I just didn’t believe that a human being could play piano like that." Freddie started down the road to nuttydom playing piano for Screamin' Lord Sutch, his long time partner in crime, while the young Ritchie Blackmore took over his job on guitar. He later joined Eden Kane’s band touring with Cliff Richard and Marty Wilde until, like many other British acts in the sixties, he found his way to Hamburg, initially playing with Sutch and later joining the houseband at the legendary Top Ten Club and The Star Club. When asked the inevitable questions about the Beatles, Freddie said "Lennon was a nut case but they were the same as the rest of us, just a bunch of working-class lads playing the circuit, we didn’t see them any differently; it just happened for them and they got on." Years later Paul McCartney paid Freddie the ultimate tribute by inviting him on stage at The Hammersmith Odeon. It was, however, visiting Americans who made Hamburg memorable for Freddie, when he met and sat in with all of the rock ’n’ roll greats. "I played with Jerry Lee Lewis for a week, Chuck Berry, Little Richard, Fats Domino, The Crickets and Gene Vincent, I also met Sam Cooke there, who was a real gentleman". These musicians, particularly Jerry Lee, remained an enduring influence on Freddie’s prolific writing career which eventually resulted in 19 singles, 8 albums, 12 compilations and had stars such as Tom Jones and Charlie Gracie covering his songs. "In my mind and in my music, I stayed in the fifties; I love country music though and do a few country numbers in the set, there are so many facets to it, from Cash to Lewis. Rock ’n’ roll is pure excitement, there is nothing else that can make an entire audience, of all ages and descriptions, start stamping their feet. It’s that incessant drive in the beat. Fads come and go but rock’n’roll has stayed. I have been playing it since day one and I’m still playing it now". For many people, Freddie burst into prominence with the 1979 revival of the Jack Good TV show ’Oh Boy’ which made him a household name, especially on the continent. "I have followed the re-runs of it right across Europe, playing major dates of the back of it. ’Oh Boy’ sparked a massive following in Italy, Spain, France, Portugal, Germany and, believe it or not, in Africa". Freddie’s life now consists of jetting backwards and forwards across European capitals playing festivals and TV dates, sharing billing with his own heroes like Sleepy Labeef, Scotty Moore and Chuck Berry. "I’m glad that the TV success happened later in life because I could handle it, a lot of people couldn’t. It also saddens me that some missed it the second time around, people like Johnny Kidd who could have taken the whole scene by storm". Freddie Lee is an unassuming bloke, with no time for the superstar syndrome he simply reckons that "If you can’t mix with people what can you do? I am lucky to have travelled the world, met some great people and got paid for what I love to do". Freddie insists that his band also get a mention "these are faithful guys who have followed me through thick and thin. If I can, I fly them out where ever I go. Robin Murly plays Bass, Les Bailly on drums, they have played with just about everyone in the game, and Pete Davenport plays guitar. Pete also works with The Comets and deps for Scotty Moore.
Freddie "Fingers" Lee died on January 13, 2014.