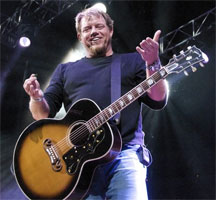 Texas native Pat Green got his start in country music while still attending college in the mid-'90s. As a teenager, Green quickly took to the sounds of several Lone Star State performers like Robert Earl Keen, Waylon Jennings, Jerry Jeff Walker, and Willie Nelson. He started writing songs at age 18 while studying at Texas Tech, and Green was eager and earnest in making something happen. He convinced his parents to loan him some money to record an album.
The independently released Dancehall Dreamer appeared in 1998 just as Green was becoming a hot performer on the local bar scene. A year later, Green wowed an audience of 2,000 people at Willie Nelson's July 4th picnic, and that magnetic event was captured for his second album, Live at Billy Bob's Texas. Green continued to write and record as the decade came to a close. Songs We Wish We'd Written was issued in 2001, and in five years' time, Green had sold over 200,000 copies without major-label support. Republic was so impressed with Green's grassroots approach that they inked him a deal before Christmas. Three Days marked his first proper release. Two years later, Green joined producer Don Gehman (Hootie & the Blowfish, R.E.M., Nanci Griffith) for Wave on Wave, and in 2004 Lucky Ones came out. In 2006, after a move to RCA imprint BNA, Cannonball was issued, followed by What I'm For in 2009, which found Green working with producer Dann Huff. He revisited some of his favorite songs and songwriters for 2012's Songs We Wish We'd Written II, a sequel to his 2001 album.