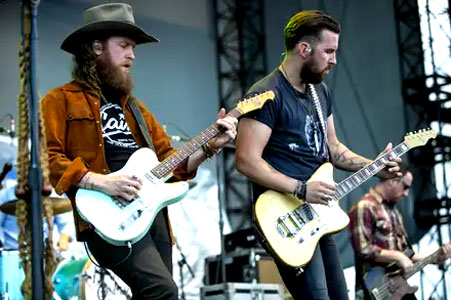 Nashville-based duo Brothers Osborne make earthy, passionate country-rock.
Raised in Deale, Maryland, siblings John and T.J. Osborne grew up listening to their father's country and rock records. Encouraged to write and play their own music, the brothers began to practice in a shed behind their house. By their teens they had formed the cover band Deuce & a Quarter, playing songs by Lynyrd Skynyrd, Merle Haggard, Bob Seger, and others in local bars. John eventually moved to Nashville, followed two years later by T.J., and Brothers Osborne were born.
In 2011, the brothers signed a publishing deal with Warner-Chappell/King Pen Music, and a year later they signed a record deal with Capitol. The duo's debut single, "Let's Go There," appeared in 2013, followed by the single "Rum" in 2014. A year later, they released a re-recorded version of their EP track "Stay a Little Longer." Produced by Jay Joyce (Emmylou Harris, Keith Urban, Faith Hill), the single eventually peaked at number four on Billboard's country chart and eventually went platinum, also earning the duo their first Grammy nomination.
In 2016, Brothers Osborne released their debut full-length album, the Joyce-produced Pawn Shop. The album included both "Stay a Little Longer" and "Rum," as well as subsequent charting singles "21 Summer" and "It Ain't My Fault." Industry recognition followed quickly; the brothers took home Vocal Duo of the Year at both the CMA and ACM awards, and "21 Summer" and "It Ain't My Fault" were both nominated for Grammy Awards. The duo's sophomore album, Port Saint Joe, appeared in April 2018 and included the whiskey-soaked single "Shoot Me Straight" as well as "I Don't Remember Me (Before You)." Port Saint Joe earned Brothers Osborne Grammy nominations for Best Country Album as well as two for Best Country Duo/Group Performance, for "Shoot Me Straight" in 2018 and "I Don't Remember Me (Before You)" the following year. In October 2019, the pair issued the concert LP Live at the Ryman.