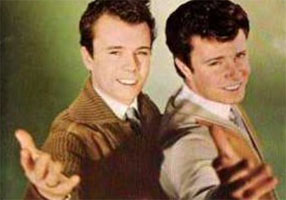 For about five years, from 1958 through 1963, Ricky Brook (born on October 24, 1940) and Geoffrey Brook (born on April 12, 1943) bidded fair to become England's answer to the Everly Brothers. The two brothers, who deliberately cultivated nearly identical appearances on stage despite the nearly three years' difference in their ages, began performing skiffle together in 1956, amid the boom for that uniquely British amalgam of folk, blues, jazz, and rock & roll. After winning a talent competition, they chose to turn professional and developed a sound very similar to that of the Everly Brothers, who were just emerging as stars at the time — they were also probably influenced to some extent by the Kalin Twins (themselves similar to the Everly Brothers) and their single "When." In 1960, they were signed to the Top Rank label and attracted attention with their cover of the Brothers Four hit "Greenfields," which became an Italian hit. Their subsequent singles included the Everly Brothers-related pairing "Please Help Me I'm Falling" b/w "When Will I Be Loved?" which failed to chart. In 1961, the Brook Brothers jumped to Pye Records and were assigned to producer Tony Hatch, and their second single for the label, "Warpaint," became a British Top 20 hit. They subsequently recorded a self-titled LP (containing their covers of "Hello Mary Lou" and "The Trolley Song," among other rock & roll and non-rock & roll standards), and toured with Cliff Richard and Bobby Rydell, thus enhancing their status and exposure in England, though, like virtually every other British act of the era, they never made an impact in America. The Brook Brothers enjoyed lesser hits with "Ain't Gonna Wash for a Week," "He's Old Enough to Know Better," "Welcome Home Baby," and "Trouble Is My Middle Name." The duo managed a lively appearance in Richard Lester's debut feature film, the scintillating jukebox movie It's Trad, Dad (also known as Ring-A-Ding Rhythm), miming in an elaborately shot and edited performance of the song "Double Trouble." By that time, in mid-1963, the beat boom out of Liverpool, spearheaded by the Beatles, was dominating the charts and the Brook Brothers seemed more suited to the cabaret circuit. They'd disappeared from view by 1965, leaving behind some fond memories for homegrown British audiences. At the end of the '90s, Castle Music put together a double-CD compilation of the Brook Brothers' complete Pye label recordings, including outtakes and rarities.