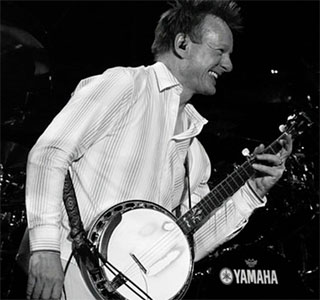 Bluegrass is so rooted in folk traditions that it usually doesn't take much to rock the boat. The progressive bluegrass movement takes the styles and structures of the past and subverts them with rock & roll spirit and a sometimes punk rock attitude.
Danny Barnes grew up in Texas, where he was raised on the music of bluegrass pioneers Bill Monroe, Flatt & Scruggs, and Jimmie Rodgers. A graduate of the University of Texas with a degree in audio engineering, Barnes dedicated himself to traditional bluegrass playing, picking up the banjo and seeing where the instrument would lead him. In Barnes' case, the banjo led him to the Bad Livers, a progressive bluegrass band formed in 1990 and likely either to offend or amaze fans of the genre. Also featuring bandmates Mark Rubin (on bass and tuba) and mandolin and guitar player Bob Grant (who replaced fiddle player Ralph White), the group is as comfortable on the punk circuit as it is on the folk circuit.
But Barnes' output extends well beyond that project. He frequently plays with artists such as guitarist Bill Frisell, Dave Matthews, and keyboardist Wayne Horvitz; has composed the scores to Richard Linklater's The Newton Boys and (with Frisell) the documentary American Hollow; and has appeared on too many commercials and sat in with too many bands to mention. He has also released a handful of notable solo albums, including 2010's genre-defying Pizza Box. Barnesfollowed that album with 2011's Rocket, issued on ATO. It was produced by John Alagia, and features all-star drummer Matt Chamberlain and keyboardist/bassist Zac Rae. Barnesplayed various banjos, guitars, basses, keyboards, and loops, and handled the programming. Dave Matthews guests on the leadoff single, a cover of T. Rex's “Bang a Gong (Get It On)."