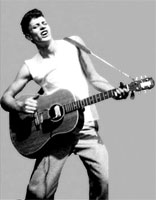 Hasil Adkins was a one of a kind rockabilly lunatic whose life and music were bizarre enough that if they had been a work of fiction, no one with any sense would have ever believed it. A frantic one-man band who bashed out ultra-crude rock & roll tunes about sex, chicken, and decapitation into a wheezing reel-to-reel tape machine in a West Virginia shack, Adkins spent most of his life making music in utter obscurity until he was discovered in the 1980s and became a cult favorite in the last two decades of his life.
Hasil Adkins was born to a poor family in Madison, WV, in 1937. Adkins developed a passion for music from listening to the radio as a boy; one day, after hearing a Hank Williams record, Adkins struck upon the notion that since no one else was credited, Williams must have played all the instruments himself, and while in time he learned that wasn't the case, he had already begun teaching himself to perform as a one-man band, using foot pedals to play the drums while using his hands to rock out on guitar. While Adkins' roots were in country music, when rock & roll hit in the mid-'50s, he took to it like a duck to water, and after putting together a primitive home-recording setup, he began committing his own rockabilly songs to tape.
However, it soon became obvious that Adkins' lyrical perspective wasn't what most folks were accustomed to -- he wrote a number of songs about a lascivious but nonexistent dance craze called "the Hunch," recorded another tune about eating peanut butter on the moon, and in one of his best-known songs, "She Said," he compared the woman of his affections to "a dying can of that commodity meat." While a few small regional labels released singles by Hasil in the late '50s and early '60s, and he headed to California in search of stardom, the world wasn't ready for his crazed vision, and Adkins ended up back in Madison, continuing to make his music in local honky tonks and for the benefit of his tape recorder.
As the '60s turned into the '70s, Adkins began to alternate rockabilly with country weepers, though even his more placid material still bore his emotionally charged trademark. Adkins self-released several country sides in the 1970s, and as was his habit he always mailed a copy of each record to the sitting president of the United States; as a result, Hasil actually received a thank-you letter from Richard M. Nixon.
In the late '70s, Billy Miller and Miriam Linna -- co-editors of Kicks magazine, members of the bands the Zantees and the A-Bones, and historians of various forms of raw, untamed music -- discovered a copy of Adkins' rare "She Said" single, and were immediately struck by its one of a kind sound and intensity. (Their enthusiasm was shared by Lux Interior and Poison Ivy of the Cramps, who cut "She Said" as the B-side of a single in 1981.) Miller and Linna tracked down Adkins, and discovered there was a lot more musical insanity where that 45 came from; they were enthusiastic enough to compile an album's worth of Hasil's home recordings from the 1950s and '60s, and 1986's Out to Hunch became the first album from their new record label, Norton Records. Featuring "She Said," "The Hunch," and three different songs about gals having their heads chopped off, Out to Hunch became an underground success, and a year later Miller and Linna brought Hasil to New York City to play a few live shows and record his first session in a proper studio, which became the album The Wild Man.
Adkins was a now a bona fide cult hero, and began touring regularly and releasing further albums, though his prodigious consumption of alcohol, coffee, and cigarettes (as well as his obsessive fondness for red meat) did little to make the middle-aged rocker a stable and reliable presence; stories of crazed shows, tossed guitars, and boozy antics loom large in the Adkins legend, as do tales of his primitive existence in West Virginia, where he was said to go fishing while watching Wheel of Fortune on TV through the magic of extension cords. In the early '90s, Adkins signed a deal with I.R.S. Records, but the label folded before they could release the album he made for them; Hasil had a more positive experience with the Mississippi blues label Fat Possum, which not only recorded and released 1999's What the Hell Was I Thinking?, but put Adkins on the road as part of a package tour with T-Model Ford and Elmo Williams.
In 2000, Hasil returned to Norton with the release of Poultry in Motion, which compiled six new recordings with eight vintage tracks, all of which concerned Hasil's favorite dish, chicken. Sadly, these proved to be the last new Hasil Adkins recordings released in his lifetime; the wild man was found dead in his Madison home on April 26, 2005. The compilation Best of the Haze followed in 2006.