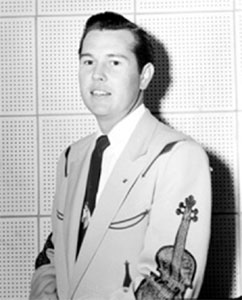 Billy Armstrong was one of country music's premier fiddle players from 1965-1977, and was named Fiddle Player of the Year 13 years in a row by the ACM. He first played professionally in 1943 with Bob Lively's Dude Ranch Cowboys, quitting after four years to form Billy Armstrong & the Westerners, a group that included Don Hoag (drums), Bobby Wagoner (guitar), and Billy Strange (guitar). Armstrong began playing on the radio in 1948 on Spade Cooley Presents; the following year, he replaced "Lefty" Joe Holley in Tommy Duncan's Western All Stars. After playing on several of Duncan's recording sessions for the Intro label, he returned to L.A. and joined Hi Busse & the Frontiersmen, playing with them until 1951. Armstrong briefly played with another band until founding the Westernaires.
Following their 1957 breakup, Armstrong joined Hank Thompson's Brazos Valley Boys for six months. Road life finally exhausted him and he quit, returned to L.A., and joined Cliffie Stone's Hometown Jamboree and then Tex Williams' band. He released two singles, "Gloria" and "If You Leave While I'm Sleeping," in 1959. In 1965, Armstrong won his first ACM Fiddler of the Year award and also released the single "The Orange Blossom Special." He then played with Gene Davis on the television series Star Route before joining the Sons of the Pioneers in 1966, with whom he sang lead and alternating tenor. He stayed with the Pioneers until early 1972, when he joined the Chaparral Brothers. During the 1970s, Armstrong also had a solo recording career, which produced three albums.