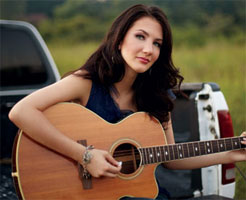 Born in Houston, TX, Katie Armiger was singing before she could walk and by ten she was already adept at connecting with her thoughts, and had begun writing poems and songs in her journal. At 14 she entered Houston's Best Country Singer competition sponsored by Radio 93Q Country, starting out in the junior division, and at the end of the eight-week contest she walked away with the grand prize and a shot at recording a two-song demo with Nashville producer Mark Oliverius. The demo deal soon blossomed into a full-scale album project and Armiger began splitting her time between Nashville and Houston, where she was a straight-A sophomore student in high school while the record was being completed. A powerful singer with a voice that reaches beyond her years, Armiger also showed a talent for writing songs, and she wrote or co-wrote seven of the 11 songs on her debut. Armiger was only 16 years old when the self-titled Katie Armiger was released by Cold River Records in 2007.