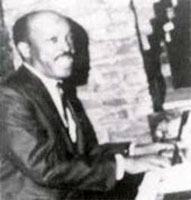 When most people think of the song "Stagger Lee," as it's usually spelled, they think of Lloyd Price and his 1958 chart-topping single. Eight years before Price's version, however, a single on Imperial Records (spelled "Stack-a-Lee"), credited to and featuring the pounding piano of Archibald, reached the R&B Top Ten and gave the song its first unified national exposure in a single rendition. If Archibald never followed this up, it wasn't for lack of talent or a lot of years in the business of making music. He was born Leon T. Gross in New Orleans, LA, in 1912 and took up the piano as a child, initially entertaining at parties under the name "Archie Boy," which became Archibald. His major influences included Burnell Santiago, Tuts Washington, and Eileen Dufeau, among his barrelhouse piano predecessors. Gross enjoyed a healthy career into his late thirties, despite the interruption of military service during World War II, happily playing at the bars in New Orleans and earning a living and a lot of local respect.
In 1950, he was signed to Imperial Records, part of the same wave that brought Dave Bartholomew and Fats Domino onto the company's roster, and Archibald made his first recordings in March 1950. During the summer of that year, he enjoyed his only national hit with the single "Stack-a-Lee," produced by Dave Bartholomew. He never saw the national charts again with any of his sides, recording for Imperial until 1952, and his subsequent attempts at making records were undermined by poor health, union disputes, and record-company difficulties. Ironically, though Archibald's early-'50s sides, such as "Ballin' With Archie," "Shake Baby Shake," and "Crescent City Bounce" — all of which featured Bartholomew's brash trumpet playing, Joe Harris, and Clarence Hall, respectively, on alto- and tenor-sax, and as solid a rock & roll beat as anything on Imperial — could have found an audience as late as 1958, they were forgotten and mostly overlooked after their initial release; and despite the fact that his playing and sound were clearly an influence on the work of such figures as Huey "Piano" Smith and Dr. John, Archibald wasn't even on the periphery of the rock & roll boom and never participated in recording even as an elder statesman in the manner of his slightly younger contemporary Professor Longhair (who cut whole albums for Paul McCartney's MPL imprint and for Alligator in the 1970s). Archibald never had a comeback, but he enjoyed long residences at such venues as the Poodle Patio Club, the Court of Two Sisters, and the Balloy Club. He died of a heart attack at the age of 60, mostly remembered by R&B scholars for his handful of sides for Imperial, and by his audience in New Orleans.