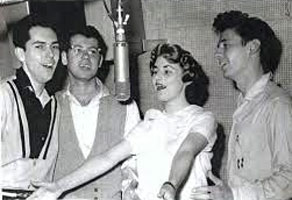 The Aquatones started their musical career in 1956, the year of Elvis, as a rockabilly-slanted Vocals and instrumental combo known as the Rhythm Kings. The lineup of Long Island teenagers featured Larry Vannatta on alto and tenor saxophones, Gene McCarthy on tenor sax and Dave Goddard on lead Vocalss and piano. 16-year-old Lynne Nixon from Malverne, Long island, was soon added as a backup Vocalsist and occasional female lead. After winning a local high school talent contest, they were signed by small-time record label owner Lou Fargo as the Acquations. Because of the guys' penchant for wearing aqua-colored shirts on-stage with Lynne in a matching dress, the group soon changed their moniker to the Aquatones. The group came to their first session with two originals: "She's the Only One for Me," a driving rocker sung by Goddard, and "You," a ballad with Nixon on lead Vocalss. Fargo cut two sessions to produce a master of "You," which became their biggest (and lone) hit in 1958. The record only got as high as number 21 on the national charts, but its longevity and enduring popularity (it was used in Martin Scorcese's Mean Streets and the TV show I'll Fly Away) has made it an evergreen. The group followed that sentimental ballad with several other good sides, but chart success proved elusive. The group went their separate ways (college, the draft, marriage, disillusionment) by 1962. In 1964, Fargo Records issued a full-length album on the group that quickly became a staple in cutout bins and is now a collector's item going for several hundred dollars. The Aquatones may have been one-hit wonders, but a wonderful hit it was.