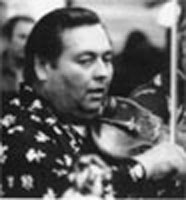 Donald (Fiddlin' Chubby) Anthony was born in Lincolnton, North Carolina, in 1935. He moved to Florida in 1958 and became one of the state's greatest bluegrass talents, capturing the Florida State Fiddling Championship three times. Until several months before his death, he lived in Wellborn, Florida, in the northern part of the state.
Raised in Shelby, N.C., Anthony began playing music at the age of seven, winning the North Carolina fiddling championship at 12, and got his biggest break in the early 1950s, when he became the fiddler for the legendary Stanley Brothers. He played fiddle for the Stanleys until 1961.
The Stanleys started recording for Mercury Records in 1954, and music historian Bob Artis descibed Chubby's work with them as "one of the high-water marks of early bluegrass.".
After the Stanleys came to Florida in 1958, they moved to the Starday label. With Anthony's unmistakable fiddling, they recorded some of their best-known compositions, including the famous Rank Strangers.
After a short hiatus from the music business, in the late-60s - early 70s, Chubby became one of the most popular performers on the festival circuit within Florida and across the nation.
In the early 1970s, Anthony played, with Robert McDougal and Kiel Brown, in the popular Tall Timber Bluegrass. Later, the band's name was changed to Big Timber, and along with guitarist, Bill Pruett and Banjo picker, Jimmy Fee, it was the band with which he performed until illness intervened.
Anthony had a unique style and set new standards for such classics as Orange Blossom Special and Maiden's Prayer. In his hands, the same fiddle that one would swear must be smoking after he played Fire on the Mountain could bring tears to the eyes with his interpretation of the delicate strains of Come Walk With Me.
Just as respected fiddlers flocked to his shows to watch his techniques, men who made their living with banjos could learn by observing his masterful use of that instrument. Before going on stage, he was once heard to tell his band that he would "do a couple of fiddle numbers, then I'll get the guitar and we'll raise hell."
When Anthony became ill in the summer of 1979, bluegrass fans and musicians throughout Florida rallied to help him by putting on benefit shows, but he finally succumbed to acute renal failure on February 5th, 1980, in Gainesville, Florida.