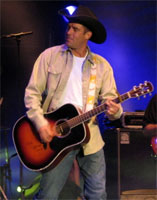 Country singer/songwriter Trent Willmon was born March 6, 1973, in Amarillo, TX, the son of Dean Willmon, a schoolteacher and cattle rancher, and Billie Willmon. He was raised on a ranch near the tiny West Texas town of Afton. His mother gave him a guitar when he was 16, and he learned to play, but he was also interested in other activities, and he won blue ribbons from the 4-H Club and the FFA (Future Farmers of America) for livestock judging, cooking skills, and speech-making, which earned him a scholarship to South Plains College in Levelland, TX, where he initially majored in animal science toward earning a degree in agriculture.
By his second year, however, he had switched to the music department, and then he dropped out to play bass in a bluegrass band. In 1995, he moved to Nashville, where he found work caring for horses while trying to get his songs heard. He signed a song-publishing contract in 1998, then organized a band and began playing in honky tonks. Finally, he was signed to a contract by Columbia Records, leading to the release of his first single, "Beer Man," in 2004, followed by "Dixie Rose Deluxe's Honky Tonk, Feed Store, Gun Shop, Used Car, Beer, Bait, BBQ, Barber Shop, Laundromat." His self-titled debut album appeared in October 2004. After the success of his first full-length album, Willmon headed to The Castle Recording Studios (onetime home of infamous gangster Al Capone) in Franklin, TN, to record his sophomore effort, A Little More Livin', which was released in 2006.