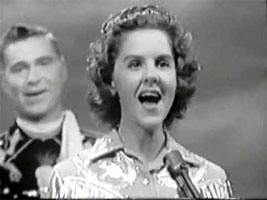 Tabby West was the country & western alias of Nashville pop singer Phyllis Spain, a native of Kingston Springs, Tennessee. After a stint on Nashville's WSM she toured with the Jack Gregory Orchestra before marrying bandleader Red Wortham, whose own orchestra she joined soon after. In time, Wortham migrated into production and music publishing, and when approached by Decca A&R exec Paul Wells to find a Kitty Wells-type country vocalist, he suggested his wife, who adopted the alias Tabby West to record her 1953 debut single "I Love You Too Much to Leave You." "They Accused Me" and "I Love Everybody" soon followed, but West failed to attract much attention at radio, and after one more Decca single, 1954's "Send Somebody Like Joe," the label shuttled her to its Coral subsidiary, where she teamed with producer Owen Bradley for singles including "My Daddy Left My Mommy Again" and "Forbidden Fruit." She also paired with singer Texas Bill Strength for the duet "You Can't Have My Love," a minor hit that nevertheless failed to keep her position on the Coral roster. After divorcing Wortham, West relocated to Springfield, Missouri and signed on with Red Foley's Ozark Jubilee television and touring revue. In 1958 she resurfaced on Capitol, but singles including "I Can't Stop Loving You" received little notice and she retired from performing. The Cowgirlboy label release The Hillbilly Sweetheart assembles 16 tracks from West's tenure at Decca/Coral.