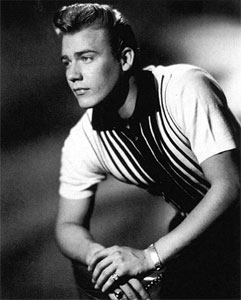 Mack Vickery never let adversity stand in the way of his ambition. Left motherless at an early age, he lived an itinerant life with his father for a decade, from the early 1940s through the early '50s. He developed a love of country music in the course of growing up, and while still in his mid-teens started his own honky tonk band. Successfully deceiving people about his age, Vickery eked out a living playing music in Michigan and Ohio. His major influence, apart from Hank Williams, was Ernest Tubb, whose 1948 hit "Have You Ever Been Lonely" became part of Vickery's repertory. At age 19, he made it to Memphis and an audition for Sun Records, on which he tried to straddle the gap between honky-tonk and rockabilly. He was rejected by Sun, and Vickery later bounced around different companies, including Gone Records and Jamie, earning little for his trouble; he never did enjoy success as a recording artist, despite a decade or more of trying. Vickery did sing and play harmonica backing Jerry Lee Lewis during the latter's years on Mercury Records, but much more important were the songs that he wrote, including "Meat Man," "I Sure Miss Those Good Old Times," "Ivory Tears," "Forever Forgiving," "That Kind of Fool," and "Rockin' My Life Away." His songs also became hits for Faron Young, Tanya Tucker, Sammi Smith, and Waylon Jennings, and his collaborations have included "She Went a Little Bit Farther," written with Merle Kilgore, which was recorded by Vickery's one-time idol Ernest Tubb, among other artists. In the mid-'80s, songs from Vickery's rejected Sun demo tape, Fool Proof, were released by Charly Records as part of their reissue of the Sun Records library. After suffering a heart attack Mack Vickery passed away December 21, 2004 at the age of 66.