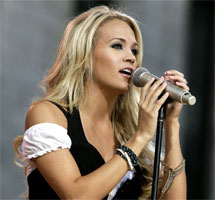 It's true that Carrie Underwood sprang to fame as an American Idol winner, but her career needs to be defined in the context of country superstars instead of reality-show contestants. Her millions of records sold, her dozens of awards from the country music academy and the Grammys, her many record-breaking feats on the charts, and her status as one of the most powerful people in the music business all testify to her staying power beyond American Idol.
Underwood grew up in the small town of Checotah, Oklahoma, and began singing with her church at the tender age of three. She performed throughout her childhood, eventually moving on to festival gigs in several states. Along with developing her singing, Underwood learned to play guitar and piano. She graduated from high school as her class salutatorian and majored in mass communication at Northeastern State College with an eye on a career in broadcast journalism, but continued her singing career throughout her studies.
As a senior just a few credits short of her degree, Underwood heard about the auditions for the 2005 season of American Idol. She tried out for the show at the St. Louis, Missouri auditions, and her innocent charm and pure, pretty voice ended up winning her not only a place among the 12 finalists, but the title of 2005's American Idol. Her debut single, "Inside Your Heaven," was released that summer, and she finished recording her debut album after completing the American Idols Live! tour. Some Hearts was released later that fall and became a smash hit, selling over 300,000 copies in its first week and eventually going platinum a whopping seven times. The album's lead single, "Jesus, Take the Wheel," was also a big success, topping Billboard's Hot Country Songs chart for six weeks.
Acclaim for the album and single spilled over into 2006, when Some Hearts re-entered Billboard's Top Ten after Underwood's appearance on the 2006 American Idol finale. Meanwhile, "Jesus, Take the Wheel" won Single Record of the Year at the Academy of Country Music Awards (where she also won Top New Female Vocalsist); a Dove Award from the Gospel Music Association; and Breakthrough Video and Best Female Video at the CMT Awards, making her the only double winner at the event. Despite her hectic career as a country music star -- which included carrying her tour through the fall of 2006 -- Underwood found the time to finish her degree. "Before He Cheats" was released as Underwood's third single late in 2006, and became her third country number one and her fourth total number one hit. That December, she won five Billboard Music Awards: Album of the Year, Top 200 Female Artist of the Year, Female Country Artist, New Country Artist, and Country Album of the Year.
Early in 2007, Underwood began work on her second album, while "Wasted" became the fourth single taken from Some Hearts; she performed it on an episode of American Idol that March, and the following month it hit number one on the Hot Country Songs Chart. Underwood gathered more accolades by winning two awards at the 2007 CMT Awards -- Video of the Year and Female Video of the Year for "Before He Cheats" -- and taking home two Grammys. She also took home three 2007 ACM Awards in May, which included Album of the Year for Some Hearts and Top Female Vocalsist. She made another trip to American Idol late in the month for the sixth season finale, where she sang "I'll Stand by You" to a standing ovation. During the show, Clive Davis recognized Underwood's sextuple-platinum sales; Underwood was the first country artist to sell that many copies of a debut album since LeAnn Rimes did it in 1996. She also appeared on Brad Paisley's album 5th Gear, which was released in June 2006.
Riding on that swell of support, Underwood released her sophomore effort Carnival Ride in October 2007. Four of the album's tracks hit the top of the country charts, pushing the album to multi-million sales and earning her two additional Grammy Awards. Two years after the album's release, Underwood released her third studio effort, Play On, which found her devoting more focus than ever to her songwriting abilities. She co-wrote seven of the album's tracks, including the leadoff single, "Cowboy Casanova." Underwood's fourth studio album, Blown Away, released in the spring of 2012, was produced by her longtime collaborator Mark Bright, and driven by its hit lead single, "Good Girl," it showed her continued growth from American Idol to savvy country-pop star.
Underwood undertook her first big starring role in 2013, when she signed on to play Maria in a live televised production of The Sound of Music on NBC. Airing on December 5, 2013, the broadcast was accompanied by a studio soundtrack. The year 2014 was relatively quiet for her, although in September she released the single "Something in the Water" and three months later the compilation Greatest Hits: Decade #1. A heavily spiritual single with the theme of baptism, "Something in the Water" topped the country and Christian charts, and also reached the pop Top 40. Early in 2015, it earned her a Grammy for Best Country Solo Performance. Later that summer, Underwood announced the October release of Storyteller, her fifth studio album, which was preceded by the single "Smoke Break." Storyteller generated three additional hits: the number ones "Heartbeat" and "Church Bells," plus the number two "Dirty Laundry." Underwood departed Arista Nashville for Capitol Records Nashville in March 2017. In January 2018, she duetted with Ludacris on "The Champion," a single tied into the 2018 Super Bowl. It debuted at 47 on the Billboard Hot 100 and would later feature on Cry Pretty, the album Underwood released in September 2018.
Cry Pretty debuted at number one on both Billboard's Country Charts and the Top 200; its title track peaked at number nine on Billboard's Country Airplay chart, with "Southbound" reaching three on the charts in 2019. Underwood released My Gift, her first Christmas album, in September 2020.