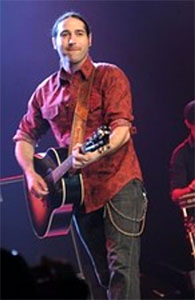 Country artist Josh Thompson kicked off his career in 2009, when the songwriter released his first single, “Beer on the Table,” and co-authored a song for Jason Michael Carroll’s Top Ten album Growing Up Is Getting Old. A native of western Wisconsin, Thompson began pouring concrete alongside his father at the age of 12, and a sense of blue-collar pride soon found its way into his music. He moved to Nashville in 2005, assembled a band, and received a boost when Columbia Records signed him to the label’s country division. “Beer on the Table” became a Top 40 country single in 2009, marking Thompson's first taste of chart success, and he spent the rest of the year touring and finalizing his debut album.
Way Out Here appeared in February 2010, debuting at nine on Billboard's country charts. Two other hits followed -- "Way Out Here" peaked at 15, "Won't Be Lonely Long" at 25 -- and Thompson received a boost by supporting both Eric Church and Brad Paisley on their respective 2010 tours. Thompson got lost in record label restructuring in 2011, moving from Columbia Nashville to RCA Nashville. He released one single for the label, "Comin' Around," which peaked at 31, then parted ways with the label. In 2012, Thompson signed with Show Dog/Universal and he spent the next year working on a new album. "Cold Beer with Your Name on It" made it to 32 in late 2013, and the full-length Turn It Up appeared in April 2014.