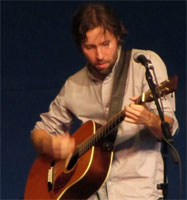 US Country singer born December 4, 1976 in Kerrville (Texas). The Texas-based singer/songwriter Owen Temple immersed himself in his father's country music collection at a very young age, learning to sing by listening to records by Guy Clark, Townes Van Zandt, Robert Earl Keen, Jr., and James McMurtry. After relocating to Austin to attend the University of Texas, Temple began writing songs, intensely focusing on the craft of those who came before him. His debut album, General Store, appeared in 1997; Passing Through followed two years later. However, college graduation loomed ahead, and Temple ultimately decided to utilize his dual degrees in finance and the liberal arts to become a financial analyst. The move was temporary, and Temple resurfaced in 2002 with his third effort, Right Here and Now. He then returned to school, pursuing a graduate degree in psychology, but the lure of country music called him back to the studio. Linking up with Texas-music veteran Lloyd Maines, Temple mixed tales of heartache and hope on Two Thousand Miles, slated for release in early 2008.